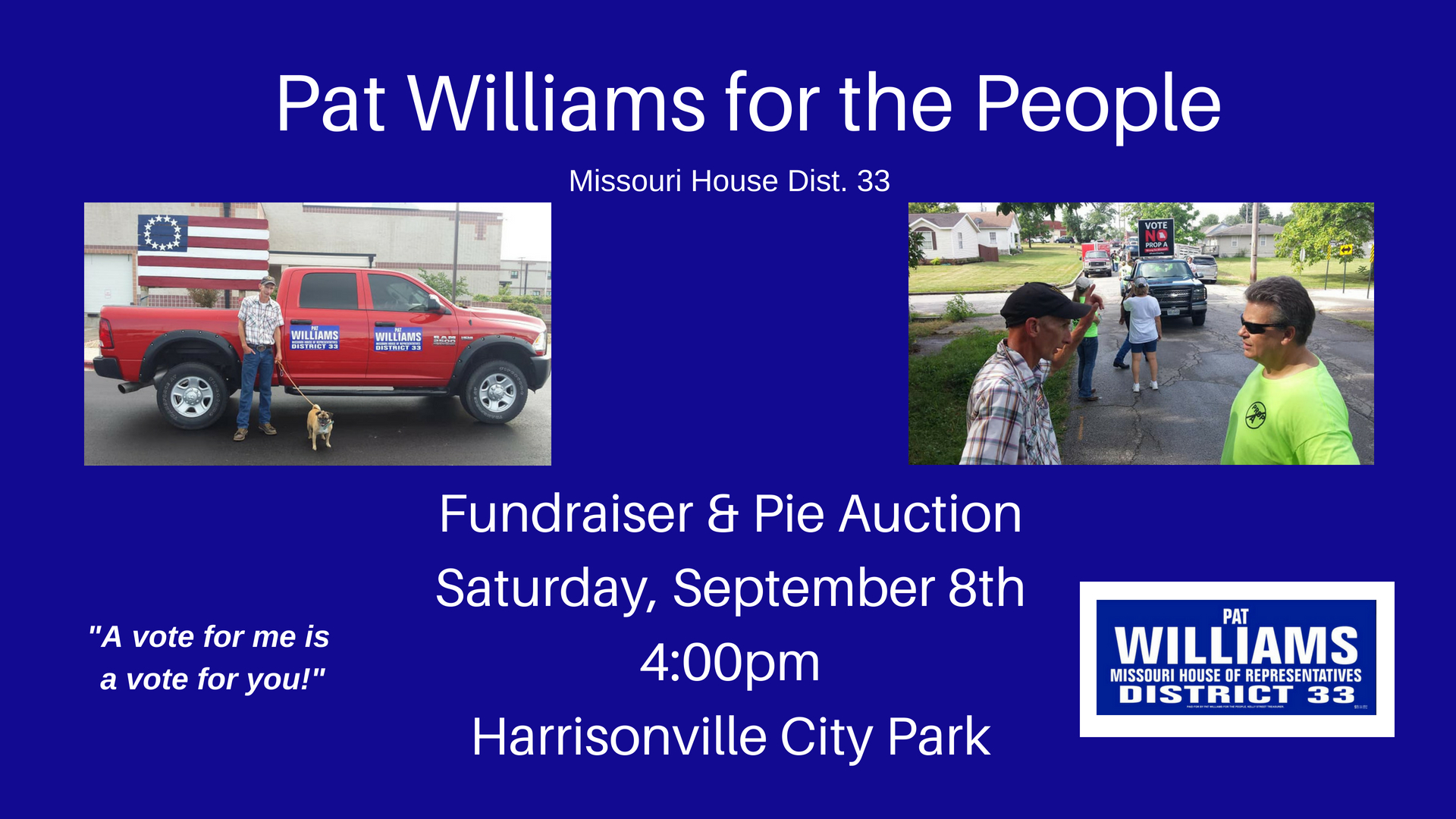 Here's your chance to show off those pie-baking skills and help out a great candidate for House District 33 here in Cass County.

Hot Dogs and the fixin's will be served as you get a chance to visit with Pat.  Auctioneer extraordinaire and fellow candidate for the Missouri House, Chase Crawford, will be on hand to auction off those pies! 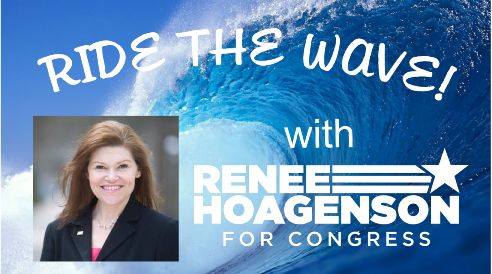 The announcement you have been waiting for! Are you ready to Ride the Blue Wave with Renee? Still thinking about it? Well you won't want to miss this! Marc Gagne and Dennis Hull have agreed to help out a bit with the fundraising!

When we reach $500, Marc and Den will give us a dance in grass skirts!

When we reach $1000 they will add the full outfit!

Don't think you can come? You can still help out! Donate before Sept 7th and when we reach $1500 we will live stream their performance on Facebook!

All donations will earn tickets toward our door prize drawings!

The announcement you have been waiting for! Are you ready to Ride the Blue Wave with Renee? Still thinking about it? Well you won't want to miss this! Marc Gagne and Dennis Hull have agreed to help out a bit with the fundraising!

When we reach $500, Marc and Den will give us a dance in grass skirts!

When we reach $1000 they will add the full outfit!

Don't think you can come? You can still help out! Donate before Sept 7th and when we reach $1500 we will live stream their performance on Facebook!

All donations will earn tickets toward our door prize drawings!

It’s time to put Teresa Hensley back into the Prosecutor’s office.

Teresa is the only candidate - democrat or republican - with 27 years in the courtroom, including a decade as Cass County's top prosecutor.

While Prosecuting Attorney for Cass County from January 2005 to December 2014, Teresa Hensley protected Cass County citizens with an unmatched record of success:  a perfect 21 for 21 murder conviction rate, hundreds of successful child abuse and sexual assault prosecutions,. a record of cracking down on scams against seniors, drunk drivers and domestic violence offenders.

Joan was born in Paola, Kansas the daughter of a school teacher and a farmer/rural mail carrier. She attended school in Paola and went on to the University of Kansas where she graduated with a B.S. in Food and Nutrition. During her professional career as a Registered Dietician, she worked for several decades in hospitals and long-term care facilities. She has now retired is an enthusiastic member of Missouri Women’s Leadership Coalition, American Association of University Women, Greater Kansas City Women’s Political Caucus and the Cass County Women’s Democratic Club.
As a 37 year resident of HD#57, she and her husband live on a farm in Cass County.  They enjoy the outdoors, wildlife, fishing and occasional travel. Her district includes all of Henry County and portions of Benton, Bates and Cass Counties. A mainly rural area, the district is made up of farms, towns and villages, Ozark woods and the Lakes Country.
Joan is running to be your Representative in HD#57 because she is worried about education and our children’s future, about our family farms that depend on expanded foreign markets to buy their crops. She's running for the creation of jobs that pay enough to raise a healthy family. She's running to demand expansions of Medicaid to help our state maintain our rural hospitals. She's running because we must increase the minimum wage to a living wage and we must provide equal opportunity for all, passing laws to guarantee equal pay for equal work, closing the gender pay gap.
Our beautiful state of Missouri is filled with history and plentiful resources. Most important, our Missouri is filled with people who help their neighbors, people who care. Joan will work alongside you and together we will raise up Missouri!

Pat Williams for the People

Pat is #SmallTownProud and #UnionStrong.

Born and raised in rural Missouri, Pat knows what we need to succeed in our communities.  Pat is an alumnus of the University of Central Missouri, FFA, and 4-H.  Pat is currently a member of the Mt. Olivet Baptist Church, Pipefitters Union Local 533 and the Missouri Cattlemen's Association.  Pat wants to hear from you, e-mail him at Patforthepeople@gmail.com.

Rep. Joe Runions Jr. represents Jackson and Cass Counties (District 37) in the Missouri House of Representatives. He was elected to his first two-year term in November 2012.

Rep. Runions was an electrician for 42 years and a member of the International Brotherhood of Electrical Workers, Local 124. He is a former president of the Muscular Dystrophy Association, a former Grand Knight and current member of the O’Hara Council of the Knights of Columbus. He served on the Grandview City Council for seven years and was an advisor for the Kansas City Port Authority. Rep. Runions has been a member of the Grandview Planning Commission, the National League of Cities and the Jackson County Democratic Committee. He is a member of St. Thomas More Catholic Church.

Rep. Runions was born on November 6, 1940, in Kansas City, Mo. He graduated from Ruskin High School in 1958. He currently resides in Grandview with his wife, Janice. They have two children and two grandchildren.

We WILL NOT be meeting at Brewbaker's this month due to our Bi-Annual ORGANIZATIONAL MEETING.
LOCATION - Cass County Courthouse

Every 2 years the Cass County Central Democratic Committee reorganizes by electing two of its members, a man and a woman, as Chair and Vice Chair, and a man and a woman who may or may not be members of the committee as Secretary or Treasurer. This meeting is this coming Thursday, August 23rd at 6:00 pm at the Old County Courthouse on The Square in Harrisonville.

Only committee people can vote for the new officers, but all are welcome to attend.

-If you are in line at 7:00 pm you get to vote
-Stay back at least 25' from the entrance to the building if you are electioneering for a cause or candidate
-DO NOT wear clothing from a candidate or cause campaign, this is considered electioneering and you will not be allowed to vote.
-Call the Election Protection Hotline: (866) OUR-VOTE -- (866) 687-8683 if you are registered and have any problems casting your ballot.

Where do I vote on Tuesday, what's on the ballot? - Voter Outreach Center

What about the new voter ID laws? 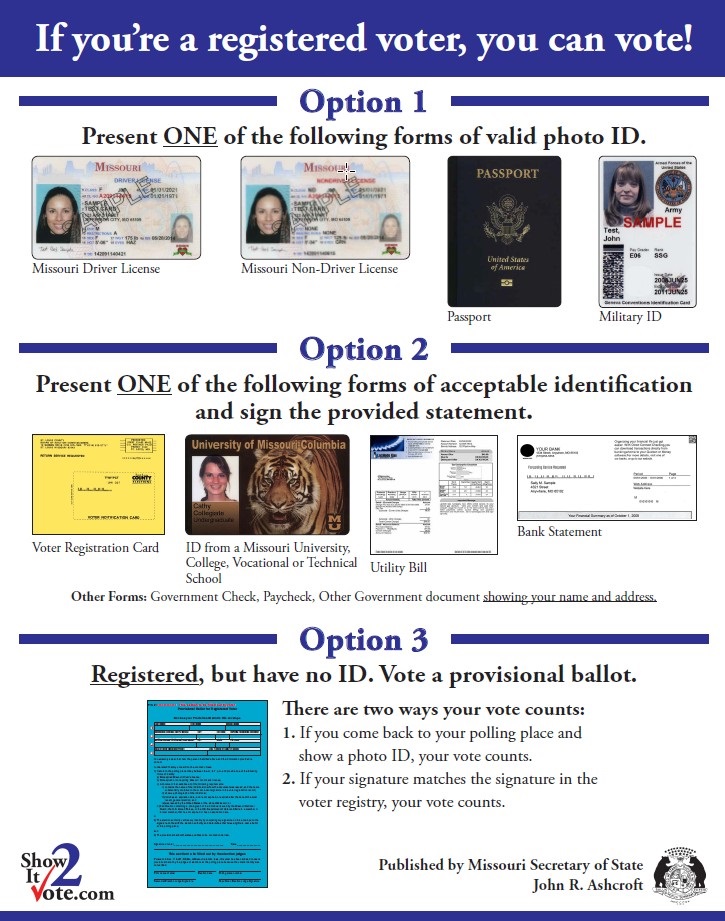 We support Missouri families and we'll be voting NO on Prop A. 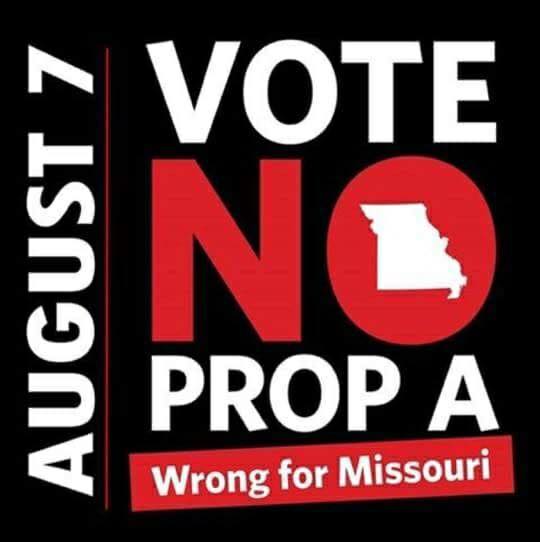 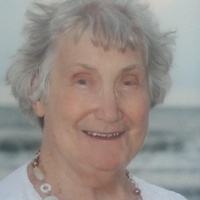 We are saddened to bring you the news that our dear friend, Phyllis Sheaks, has passed away.  We will always remember Phyllis for her fierce spirit and unwavering support for Democratic candidates and Progressive causes.  If there was a job to do, Phyllis was always there to lend a hand.  We all miss Phyllis, but we will always carry her memories with us as we continue the fight for what she so strongly believed in.  Services will be, Saturday, August 11, 2018 - 11:00 AM at Cullen Funeral Home, 612 W. Foxwood Dr., Raymore, Missouri 64083