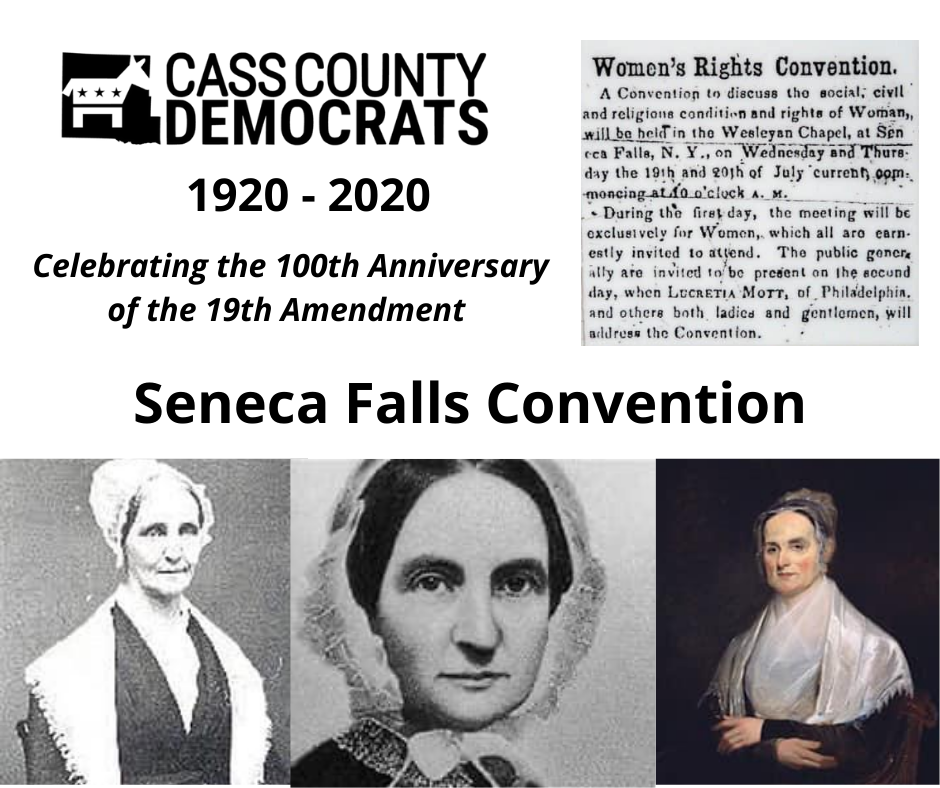 The Seneca Falls Convention billed as the first American women’s rights convention convened on July 19, 1848. The two-day event, held in Seneca Falls, NY was advertised on July 11, 1848, in the Seneca County Courier.

Despite minimal publicity, there were an estimated 300 attendees. Many attendees lived locally, as there were many abolitionists living in the area. Many women and men working in the anti-slavery movement eventually became a part of the struggle to obtain equal rights for women.

The convention was organized by Elizabeth Cady Stanton, Lucretia Mott, Jane Hunt, Mary Ann M’Clintock, and Martha Coffin Wright. The meeting included a lecture on law, a humorous presentation, and multiple discussions about the role of women in society. Stanton and the other organizers presented the Declaration of Sentiments and a list of resolutions, to be debated and modified before being put forward for signatures.

A heated debate sprang up regarding women's right to vote, with many – including Lucretia Mott – urging for its removal, but Frederick Douglass, who was the convention's sole African American attendee, argued for its inclusion, and the suffrage resolution was kept.

Elizabeth Cady Stanton, opened the convention with a speech on the convention’s goals and purpose: “We are assembled to protest against a form of government, existing without the consent of the governed—to declare our right to be free as man is free, to be represented in the government which we are taxed to support, to have such disgraceful laws as give man the power to chastise and imprison his wife, to take the wages which she earns, the property which she inherits, and, in case of separation, the children of her love…”

When preparing for our Back to Blue event A Celebration of Women's Suffrage, Barb Davis did a great deal of research on the women and men in the women's suffrage movement. We wanted to share the stories and thank Barb for her research, as we celebrate the 100th anniversary of the 19th Amendment.